by Gideon Kinzie Hawver and the Office of Sustainability
April 22, 2021

Making a living in the modern world is often strongly dependent on physical mobility. The spatial disconnect between housing and employment/education opportunities has given rise to commuter culture; and it feels like it’s almost impossible to function in some places -- Southern California in particular -- without access to a personal vehicle. While it’s true that operating without a personal vehicle can prove inconvenient at times, it is important to understand that there are other options available to us, and that those alternatives have the potential to enrich our lives.

Why is alternative transportation so important?

It turns out that driving a car alone for commuting purposes is actually a poor solution to the problem of getting from point A to point B. Commuting alone is a huge contributor to pollution globally, it’s expensive, and it’s bad for our physical and mental health. 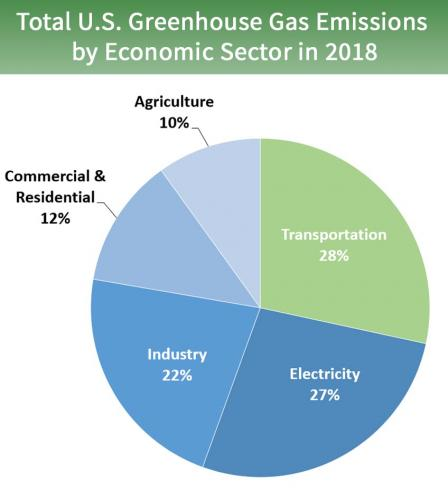 According to the EPA, transportation accounted for 28% of the greenhouse gas emissions in the US in 2018, and 72% of that fuel consumption was due to personal and light duty vehicles. This means that personal vehicles - cars, light trucks, vans, etc. - are responsible for a majority of transportation pollution in the US.

Using alternative methods of commuting can significantly reduce the amount of pollution that we dump into the environment. Fewer cars on the road means fewer miles traveled by combustion engines. Fewer miles traveled by combustion engines means less fuel consumed. And less fuel consumed means that fewer greenhouse gas emissions are dumped into the atmosphere.

We often overlook the financial cost of owning and operating cars in our daily lives. According to AAA, it costs the average driver over $9,000 annually (nearly $25/day) to own and operate a new personal vehicle -- and that figure has been steadily climbing! While the cost of fuel is probably the most glaring financial weight that many car owners will be aware of, the list also includes: maintenance costs, insurance payments, registration fees and more.

By switching to an alternative form of transportation, many of those expenses are distributed among a larger group of riders, which reduces their impact on your wallet as an individual. Some forms of alternative transportation eliminate these costs altogether; you don’t have to buy gas for a bicycle. The total savings associated with switching to a more environmentally friendly commuting method can also go beyond your wallet. Riding a bus or a train can free up hundreds of hours of your time annually!

Finally, it is important to recognize the health benefits of changing our commuting patterns. According to studies conducted at UCR, commuting exposes us to toxic chemicals used in the manufacture and operation of motor vehicles, and the exposure increases with the length of your commute. 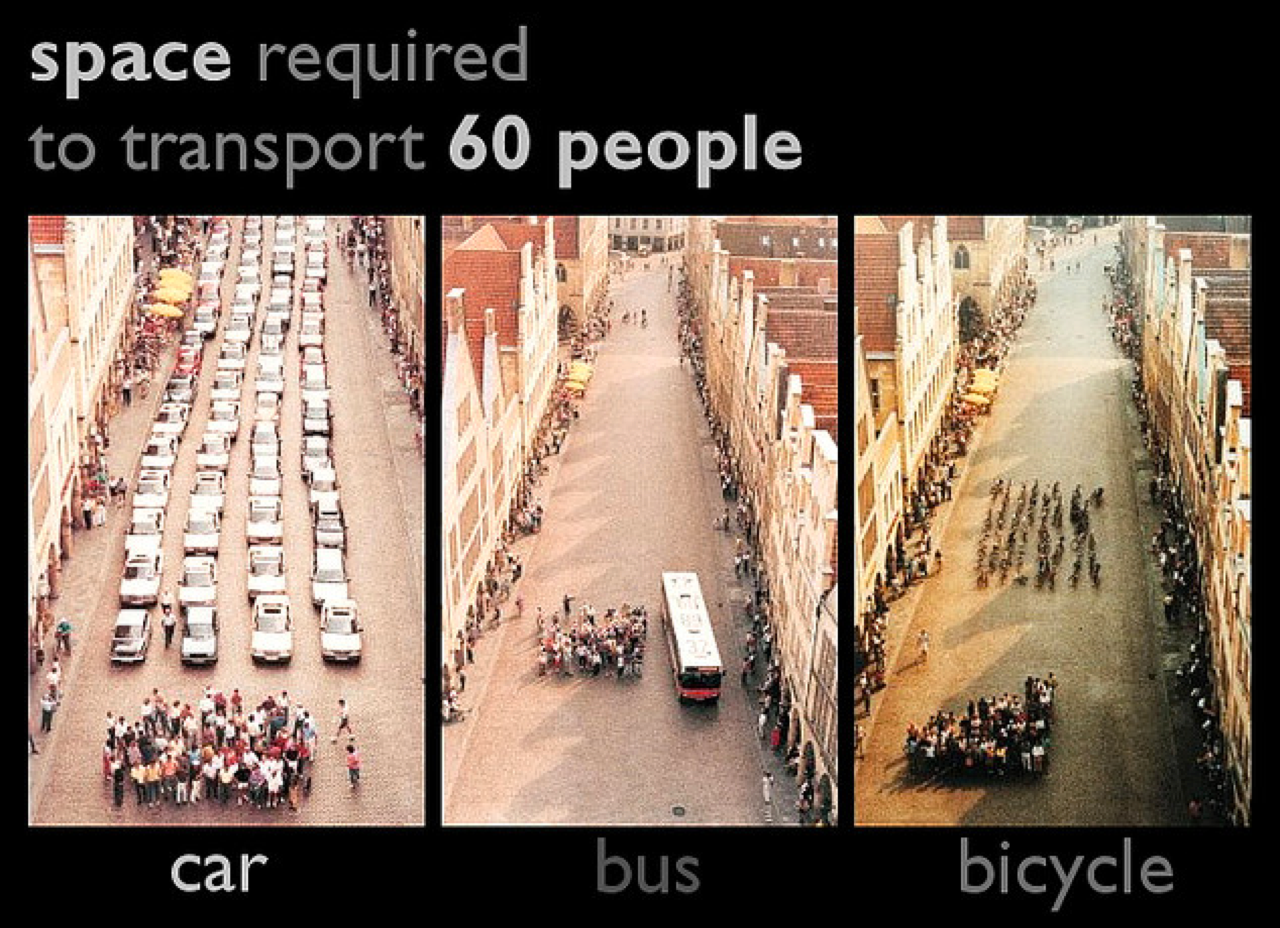 The health risks of commuting by car aren’t just physical. The stress of commuting has a serious impact on us, and it can be brought on by a host of factors such as traffic and parking congestion. Using alternative transportation often helps alleviate these two specific issues by being more space efficient, and relieving us of the responsibilities associated with solo commuting; you don’t have to worry about remaining alert in stop-and-go traffic when you aren’t the person at the wheel, and you don’t need to fight for a parking spot if your ride never parks. Alternative transportation also inherently reduces the amount of space occupied by vehicles on the road, which eases traffic congestion and parking space scarcity for everyone!

What kind of alternative transportation do I have access to around UCR?

If you’re looking for an alternative method of commuting to, from and around UCR then you’re in luck! The UCR community has access resources in four major alternative transportation modes, including: commuter rail, ride sharing communities, bus networks, and human powered transportation.

Southern California’s commuter rail network spans from San Diego to Los Angeles and beyond. With an endless list of highlight destinations and two metrolink stations within 3 miles of the UCR campus, students have access to all of Southern California. Metrolink also offers promotional pricing that makes it even easier for students to get out and about. 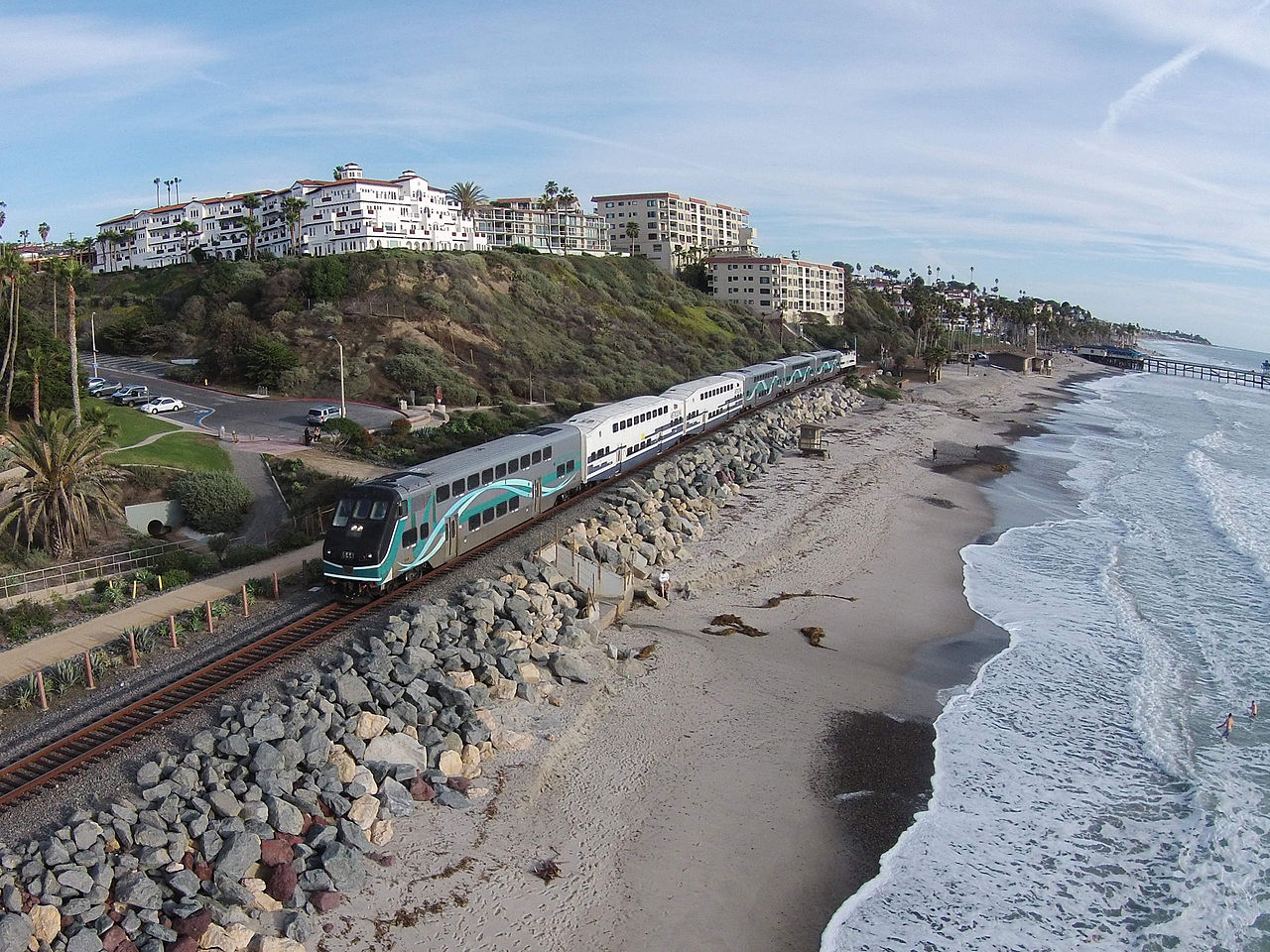 Every weekend, Metrolink offers a $10 day pass that allows riders the ability to travel anywhere in the rail network; and students get a 25% discount on all other train fare, making it an even more affordable commuting option. If a station and its associated routes can connect you to the campus, then you have a chance to experience the safest and fastest form of commuting long distances while leaving the rush hour traffic behind. Trains are spacious and comfortable, though usually more expensive than other alternative modes over short distances. And even though the stations will rarely drop you off at your destination, there is enough room to bring your bike, skateboard, or scooter to make the last leg of your trips quick and easy.

Busses can generally seat 40 passengers, and have standing room to accommodate 60 people during rush hour. Routes can be separated into two categories: local routes and commuter routes. Local routes run frequently throughout the day and tend to cover a smaller area of the community. They stop frequently and provide transportation of a multitude of communities along their path, bringing riders access to the grocery store, the laundromat, restaurants and more. Usually local routes are used if you want to make a trip within a ten mile radius from your starting point. 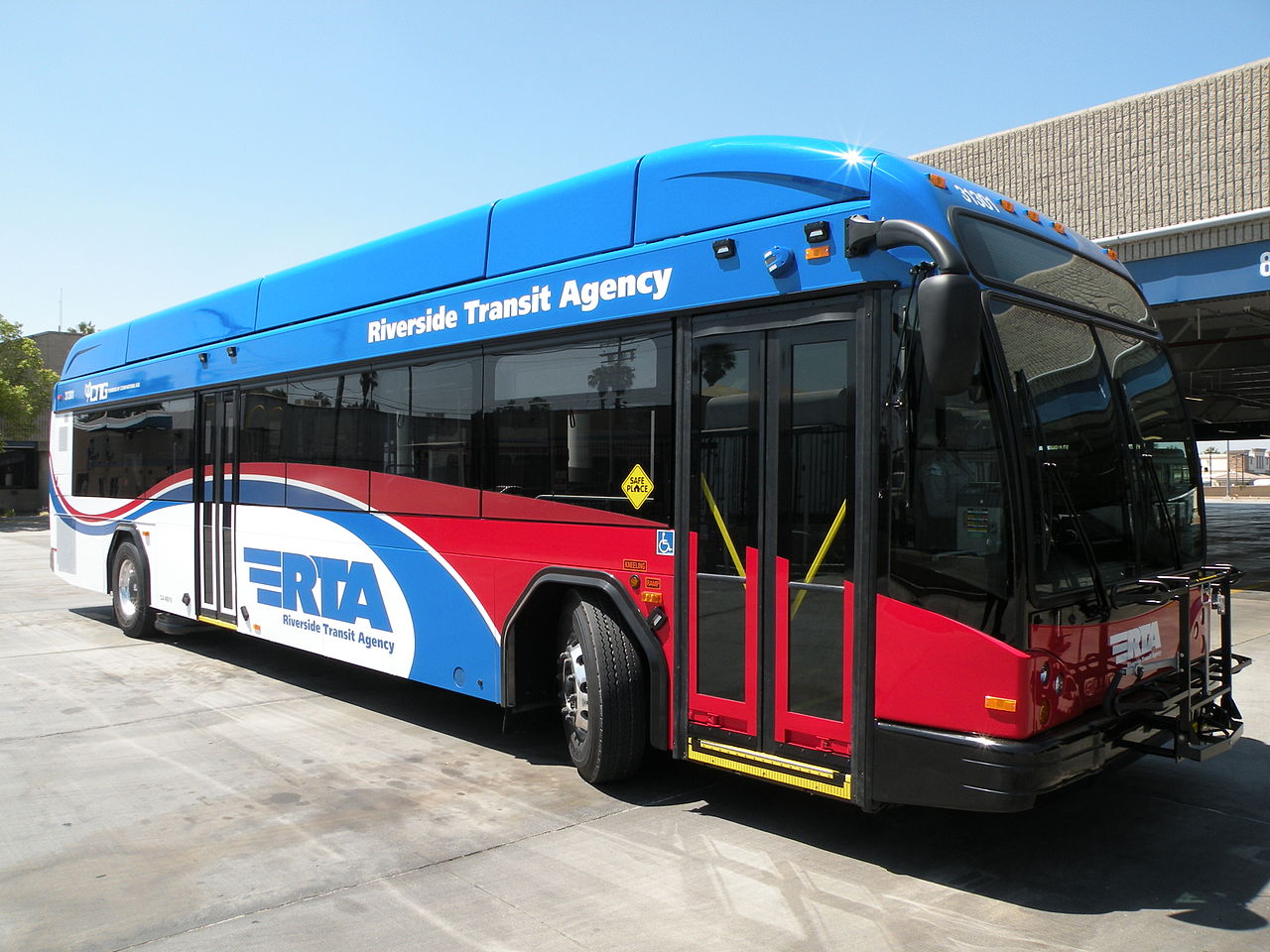 Commuter routes serve a different purpose. They specifically operate to replace long distance commuting by car. They tend to travel longer distances and stop less frequently. A good example of commuter routes at UCR are the Sunline which connects the campus to Palm Desert (66 miles apart!), and the Commuter Link Express that connects Downtown Riverside to Disneyland.

The best part about bus transit is that students have the opportunity to ride for free. All day, every day within the RTA public transportation network, students can ride for free while using the Token Transit app on their smartphones.

A carpool is a group of riders who band together into a single vehicle to tackle the daily commute. In Southern California, carpools are any number of two or more riders in a vehicle; and these vehicles have access to special lanes which generally bypass heavy traffic in rush hour. A group of 3 or more students at UCR can register with TAPS to take advantage of parking on the BIg Springs parking structure across from Lot 13. Vanpooling is a commuting arrangement that transports between 5 and 12 passengers to their daily destination. At UCR, students can join an existing vanpool or apply for new routes that would better serve them by using the Vanpool Program Application.

The advantage of both these modes is that they have fewer stops than public transit options (like trains and buses). They drop you off at UCR rather than near it. And they offer the comfort of a smaller, regular community of riders with which you can share your commute.

These modes tend to be more expensive than the other three, but you are paying for the convenience, and still saving significant amounts of time and money compared to driving to and from school on your own.

For the shorter distances in your daily travels, human powered transportation offers the most versatility. Walking is an excellent option for commutes around a mile in length or less. It costs nothing. It promotes good health through exercise. And it gives you an opportunity to relax and experience your surrounding environment in a leisurely way that few other modes can match. 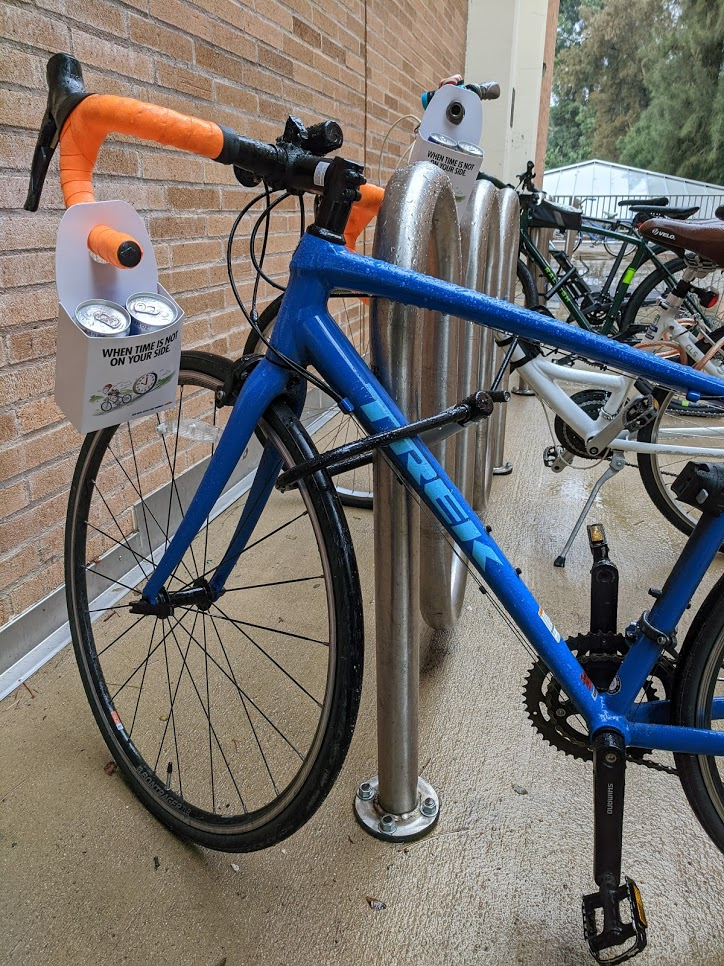 Using a skateboard or scooter (or other small diameter wheel mode) to get to and from campus can make those same short commutes fly. And when you get to campus, they offer an excellent mode of transportation for getting around campus that much faster. You don’t have to worry about locking up these smaller transit tools (like you do with bikes), you can simply take them with you to class.

Bikes really offer the most versatility in the human powered transportation modes. They are excellent options for commuting distances of up to 6 miles. They offer the ability to carry cargo like additional school/work supplies or groceries. And bikes can be used just as much for recreational activities as for utility needs. UCR was recently named a Bicycle Friendly University by the League of American Bicyclists and has a wide range of resources for bike commuters to take advantage of, such as free bike registration and maintenance stations across campus. New protected bike lanes have been added to segments of Watkins Drive on the North edge of campus. This represents a significant development in bicycle friendly infrastructure in the city and county of Riverside! 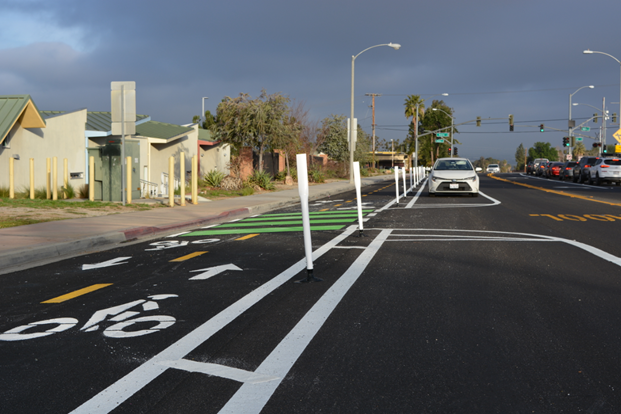 All of these human powered modes can be used in combination with long distance transit like Metrolink, carpool/vanpool, and the RTA bus network to make getting around campus even easier. Pack your bike, skateboard, or scooter with you and make the last leg of your trip to campus that much shorter.

If you’re interested in using any of the human powered modes on or around campus, then consider joining the R’Cycle Co-op student organization at UCR. Their goal is to grow a community of riders on campus focused on: enjoying these alternative modes of transportation, learning how to fix and operate them effectively and safely, and ensuring that these modes will always have a place on campus.

We hope that you have enjoyed this exploration of alternative commuting modes for the world of UCR and beyond. If you have any questions regarding alternative transportation opportunities then be sure to reach out to the office of Transportation Services at UCR, and we hope you have a safe and wonderful ride!